Pinned With Polygon | Getting Loose at Cannonball with the Polygon Crew

Thredbo was alive, bikes blocking every inch of the place, not even enough room for the sheer amount of equipment and stoke. Cannonball was on, and the Polygon team was ready to get on the trails.

When you combine a bunch of high-energy people and high-risk activities, there is bound to be a bit of carnage and a hell of a lot of fun. So the Polygon team descended on Thredbo for the 2022 Cannonball Festival in February. Five days of going fast on bikes with lift-assisted ‘up track’ to keep the legs fresh.

Thredbo was alive, bikes blocking every inch of the place, not even enough room for the sheer amount of equipment and stoke. Cannonball was on, and the Polygon team was ready to get on the trails.

As it turns out, trail bikes can still rip up the Cannonball Downhill track, Em on her T8 and Thiago on his Mt Bromo for party laps down the hill to check out the right (and wrong) lines on “The Chute”. This notorious location was home to some of the most high-speed impacts of the whole festival. The new addition to the track this year was a throwback to the OG Cannonball track, which certainly added a lil extra spice to the already Thai hot trail. Em making the most of the little lumps on Sidewinder. Oliver Smith/Thredbo MTB Kalan, on his N9, made easy work of the flow and downhill trails and could seldom be found without a massive smile on or back at the event hub. All business this guy, not a second to be spared to refuel, Kalan was the team member with the most runs under his belt. A rare occasion: downtime between runs when Kalan was not going full pelt on the bike. Oliver Smith/Thredbo MTB

The boys were a little more focused on the event action and beer drinking antics while waiting for the whip offs to start. Shenanigans included Tom finding an array of creative and highly sketchy activities like jumping over fence frames into Thredbo river on his Trid ZZ and soaking teammates with beer on their race runs. The creative works of Tom Wrigley and his Trid ZZ (sponsored by Somersby). Oliver Smith/Thredbo MTB Jadon got amongst some bike park action and was a crowd-pleaser at the whip offs. He knows how to raise a crowd – fist pump mid-air style. Unfortunately, a little dabble in trail action would also see Jadon wrong side up, adding to the list of speed inflicted injuries, which only supported the need for more beer consumption early in the day and party laps to keep the energy going.

The whip off event was what Jadon and Tom had been holding out for. Everyone sitting on the hill, drinks in hand, with the suspense of racing done, watching some of the best freeriders and dirt jumpers in Australia launch themselves – leaving absolutely nothing on the table. Of course, there was also the anticipation for some pretty bad impacts. Like watching a train crash, you don’t want to see it, but you also do! Luckily the boys kept it right side up, and even some of the heavier landings from the rest of the riders saw everyone walk away relatively unscathed. Tom getting high when others whipped. Oliver Smith/Thredbo MTB Chris/Red is equipped with the proper protection for whips and front flips. Oliver Smith/Thredbo MTB

The whip offs and Cannonball Downhill Pro event were definite spectator highlights. However, like most festivals that bring a lot of like-minded people together, it was also all about the little moments in between. Diego and Dave supported the Polygon team throughout the event, dialling in bikes for confident race runs, stepping in, right on time after bike breaking trails, with what may have been the last Shimano derailleur available in Australia. A mean B&E cooked up at the tent and partaking in concocting the most creative ways to open a beer with nothing but your bike! The pre-race chats with other riders at the top of the run and finding out which part of Australia they had travelled from. Expanding what you thought was already a fairly comprehensive view of ‘best locations to ride in Australia’. And finally, the post-race chats at the pub with new people who cannot get enough of bikes.

I think it’s fair to say the whole Polygon team would take the stitches, falls, gravel rash, bruises and near misses all over again to relive it.

Until next year. Peace & pushys from the Polygon team. 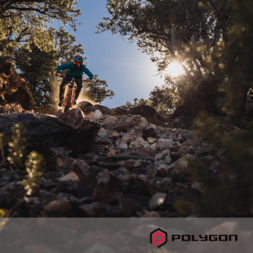